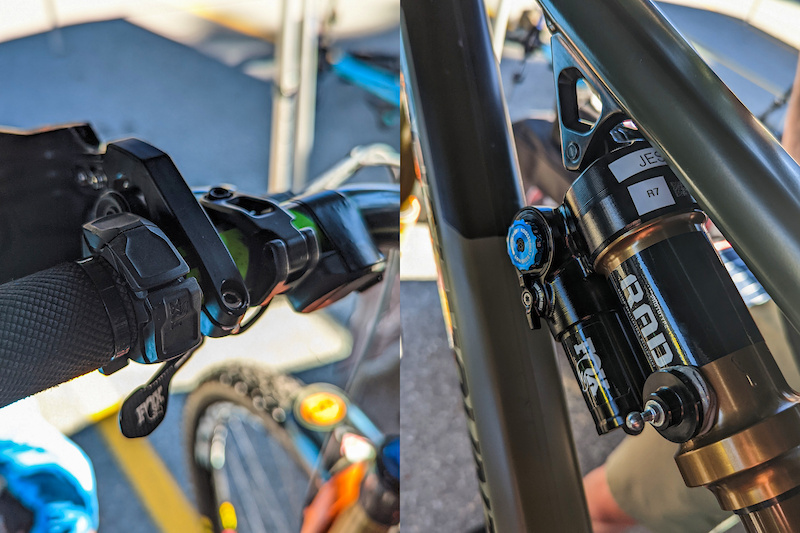 By Margaret M. Pollard Last updated Aug 7, 2022
Share
Last month we saw new Fox stuff on Ed Masters’ Pivot Firebird, and it looks like that product is now rolling out to other athletes. Jesse Melamed’s Rocky Mountain also has the new system, and he just rode it to an impressive result in the EWS Whistler Pro Stage. Unfortunately, Kaz and Alicia are racing the EWS100 at the moment, Henry is preparing the Pinkbike Racing setup at MSA, Seb is sleeping in the UK and Levy and Matt are out today. So you’ll have to settle for my uninformed, non-technical insights.
There seems to be a remote that would presumably go through different modes. This is currently missing from the current LiveValve system and could be a good way for the system to err on the side of openness. On the track, we saw Richie Rude and Youn Deniaud with similar setups. I’m personally surprised to see riders trying the system in a place like Whistler, where many of them have historically chosen coil-over suspension. While this year’s Whistler EWS course has some punchy climbs, I imagine any benefits of a system like this would be amplified on faster, smoother runs elsewhere. Anyway, after the Pro stage, it looks like the system has passed its first major test.

If you were hoping for more information, hang in there. I know Levy and Matt shot a video with Jesse testing this system which is going to be done tomorrow. I’m pretty sure Fox is still a long way from production, so not exactly “see you tomorrow”, but pretty close.