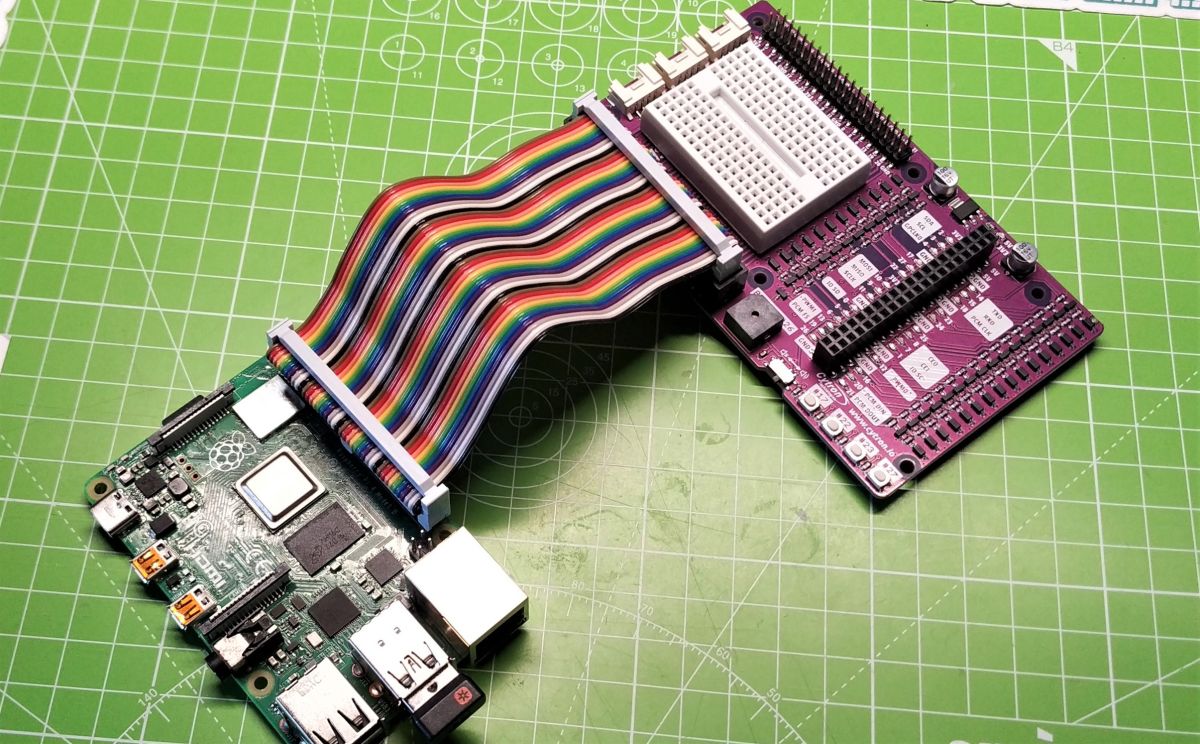 One of the most interesting aspects of the Raspberry Pi is its huge ecosystem of HATs, expansion boards that plug directly into the Pi’s 40 GPIO pins. best Raspberry Pi hats provide additional lights, motors, sensors, and other capabilities that you can’t get with the Pi alone. But what if you want to use the HAT without putting it directly on your Pi or if you want to combine the HAT with other electronic devices?

Cytron’s $ 10 Maker HAT Base is a GPIO breakout board for all Raspberry Pi models with 40 GPIO pins and it’s a small electronics lab to use with HAT / pHATs. We can place a HAT / pHAT on the GPIO and still have access to the remaining GPIO pins through a second bypass header. But that’s not all because this little board also has connections for Grove components and a series of LEDs and buttons that we can use in our projects.

We plugged the Cytron Maker HAT base into our Raspberry Pi 400 and tested it. Who is it for? What can it do? What are the alternatives ?

Using the Cytron Maker HAT Base

It really couldn’t be easier. Connect the board to any model of Raspberry Pi using the supplied flat cable, then turn it on normally. The flat cable is rather stiff and the included clip to bend and hold its shape is a bit tricky, so we didn’t use it. At the most basic level, Maker HAT Base is ready to use in your electronics projects.

Using the male or female headers, we can connect electronic components and integrate them into a circuit via the included breadboard. If HATs are more your thing, be sure to plug them in before powering them up, but other than that they will install and work as if they were directly wired to the GPIO. The HAT and pHAT (mini HAT) can be attached using the M2.5 screw points located on the left side of the board. If you are using the included breadboard, make sure there is space between the underside of your HAT and the breadboard.

With a HAT connected, we still have access to the female GPIO header, located in the center right of the board. Using this header we can connect other electronic devices to use with the Maker HAT base. For example, an HC-SR04P ultrasonic sensor with a motor controller would create a motion-triggered kinetic sculpture or be used as the “eyes” of a simple robot.

Another use case of the extra GPIO header is a little GPIO hack. We can leverage Pins to understand how a HAT uses them, or we can hack Pins to perform other tasks. This use case requires a bit more knowledge and equipment than a typical home hobbyist, but it’s there if we need it.

The female GPIO header also has a series of LEDs connected to all user-controllable GPIO pins which are clearly marked with their BCM pin numbers. These LEDs indicate the status of their respective GPIO pins and experienced manufacturers may think of them as a gimmick, but hear us out. Knowing the state of the LED through the board means we can be sure of the state (high or low) of the GPIO pin and it can help debug a connection that uses that pin. A single core wire, bad solder joint, or worn breadboard could be the cause of a problem, but without knowing the status of the GPIO, we need to debug the pin and our code before checking the circuit. We know this because we have been there, in the classroom and in our workshop.

At the bottom right of Maker HAT Base we find a piezo buzzer and four pushbuttons, all of which BCM pin numbers are printed on. Buttons are simple on / off inputs but their inclusion is welcome as we have four buttons ready to use in our code. We tested them with GPIO Zero, a Python 3 electronics module, and they worked with very little code. The same goes for the piezo buzzer, which we can turn on / off using digital I / O or create tones using PWM (Pulse Width Modulation) for simple 8-bit style music. If you do not want the buzzer to sound, a switch to the right of the buzzer will disconnect it from the GPIO.

On the left of the Maker HAT base are three Grove connectors. These are similar to the Stemma / Stemma QT and Qwiic connectors in that they are polarized connections for use with compatible devices. The three Grove connectors provide I2C, UART and GPIO access. Essentially, these connectors are directly connected to the GPIO of the Raspberry Pi and the connector is more convenient. If you purchased the Grove ecosystem, your components will work. If you haven’t, those ports aren’t essential, more â€œnice to haveâ€ if anything.

What are the alternatives to Cytron’s Maker HAT base?

If you want to hack HATs, the alternatives are slim, but present and at the same price. Pimoroni has editor’s choice Flat HAT Hacker, designed for Raspberry Pi 400. This card allows us to use two pHAT cards at a time, or to change the GPIO pins of a running HAT.

If you have another model of Raspberry P, i, the HAT Hacker HAT adapts to your Pi’s GPIO and offers the same functionality. A similar product is RasPiO’s FullpHAT. These alternatives are great, but Cytron’s Maker HAT base has the edge with Grove connectors, LEDs and pushbuttons.

Who is Cytron’s Maker HAT for?

We see two types of users who would covet Maker HAT Base. The first is the learner, in class or at home, who takes his first steps with Raspberry Pi and electronics. HAT access lets them experience the world of Raspberry Pi, Grove connectors simplify electronics, and built-in LEDs and buttons deliver instant gratification that fuels learning.

The second user is the maker / hacker who is eager to tweak and study HAT / pHAT and incorporate it into their next project.

$ 10 doesn’t buy you much these days, but it does buy you that. We loved the previous two Cytron Maker Cards. The concentrated Raspberry Pi Pico Manufacturer Pi RP2040 and Manufacturer Pi Pico both have received Editor’s Choice awards, and for good reason. Maker Cards are inexpensive and packed with features for all levels of users, just like the Basic Maker HAT. Pi users of all skill levels will find use in this awesome little board, and at $ 10 it doesn’t take a big bite out of our wallets.