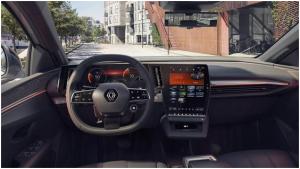 LG Electronics announced on November 1 that it had supplied its next-generation infotainment systems for the Renault Megan E-Tech Group’s new model of electric vehicle.

In September, LG Electronics and Renault unveiled a next-generation infotainment system, jointly developed by the two companies, at IAA Mobility 2021 in Munich, Germany.

The infotainment system is based on Google’s Android automotive operating system. It has received a Google Automobile Service (GAS) license by applying the latest version of the Android 10 operating system. GAS provides a variety of Google services and Android applications including Google Assistant and Google Maps which can run on Android automatic devices. This system is the first of its kind to receive a GAS license based on the Android 10 version.

The two companies have developed a platform capable of running software independently. This will allow Renault cars that use different hardware to use the latest infotainment systems, like that of the Megan E-Tech by adding a software platform.

The software platform developed by the two companies supports the Ethernet interface, a short-range network between clusters (dashboards) and central information displays (CIDs). This allows drivers to view Google Maps or control music and videos through the dashboard. In addition, the latest operating system can be updated automatically via wireless internet service, and the charging status of an electric vehicle can be checked outside the vehicle.