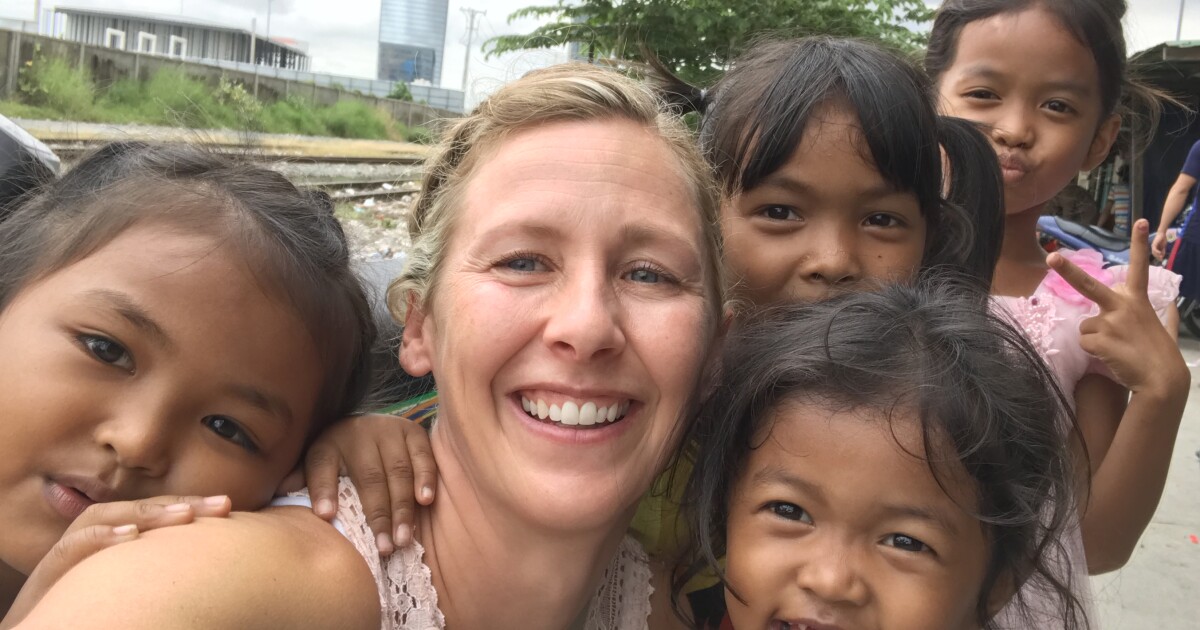 Brenda Herr, resident of Ramona, channels her love of pastry into her other passion: supporting outreach ministries in Cambodia to fight sex trafficking and help people living in poverty.

The cookies, bars, and bread she bakes at home are intended for Baking for Freedom, the nonprofit she founded in 2019 to fund her mission trips to Cambodia to help these causes.

Herr, 44, has been to Cambodia five times, mainly to help another nonprofit, Extreme Love Ministries, in its fight against sex trafficking. She has also gone to provide food, hygiene items, medical supplies and clothing to those in need.

She was introduced to Cambodia’s problems in 2015 when she attended a Christian conference in Los Angeles and met with leaders of Extreme Love Ministries, organized by the Shiloh Church in Arizona.

â€œThe group started working in Thailand, but they found out that most of the trafficked children in Thailand were from Cambodia, so they wanted to go to the source and they moved,â€ Herr said.

After the conference, Herr wanted to learn more about the organization and Cambodia.

â€œAt that point, I thought, bless the people who wanted to do this kind of work because I had no interest,â€ she recalls. â€œThen I was watching a church video and they were talking about how difficult it is for a woman or girl who is sexually trafficked and sold by her father to think anything good about Heavenly Father. There was an invitation for people to go on a missionary trip to Thailand and Cambodia. I still didn’t feel like it, but I heard the Lord tell me to go.

Lucas’s mother, 10, worried about traveling as she had a dependent son and thought her husband, Mike, and his boss might not approve.

â€œMy boss’s response was, ‘What is vacation time when you leave for such a great cause? Said Herr, field sales engineer for Indiana-based Samtec, which manufactures and sells electronic components. â€œMy husband said, ‘I’ll never say no to you, but you have to find the money.’ And I knew for sure that it was God. It was not me.

On this first trip to Cambodia, Herr met Andrea Aasen, CEO and Executive Director of Extreme Love Ministries. Aasen described to him the corruption, poverty and lack of education that was the root of the huge problem of sex trafficking in the country.

Globally, in 2018, around 50,000 victims of human trafficking were detected and reported by 148 countries, according to the United Nations. About half of these victims were trafficked for sexual exploitation and 38 percent were exploited for forced labor, according to the UN. Women are the main targets, with women accounting for 46 percent and girls 19 percent of all victims of trafficking, UN says

Aasen, who has overseen the work of missions in Cambodia for a decade, said the group strives to meet the physical, emotional and spiritual needs of residents of poor communities. They develop relationships so that they can hear about human trafficking cases and be the direct eyes and ears to protect or intervene when necessary.

The organization also helps educate children, provides vocational and vocational training for those coming out of trafficking and prostitution, and helps start small businesses, she said.

â€œWe also have work in transitional places such as bus and train stations, intervening to stop people on their way to be trafficked before they reach their next destination, and we have a working team. social and investigative who works to keep people safe and rescue people underway. exploited, â€Aasen said via email. “The complexities of lack of education, a large generation of young people and an incredible number of people living in poverty make the nation highly vulnerable to human trafficking and other forms of exploitation.”

Aasen said people living in poverty with minimal or no skills or education are likely to sell their children for a few hundred dollars or take a job that seems “too good to be true.”

â€œThere is little hope elsewhere, so they follow the opportunity thinking they are working in lumber, construction, as a cleaner or in a restaurant, only to find out once they have crossed a border or in their own home. next destination to which they are trafficked. sex, work or begging and detained against their will, â€she said.

Herr was shocked at what she saw in Cambodia, both on her first visit and on subsequent visits. Women and girls who had been physically and verbally assaulted, both by those controlling them and by their â€œclientsâ€ who had come from different countries to pay for sex with them, had no one to turn to.

â€œYou could tell they were always looking over their shoulders,â€ she said. “We didn’t see the abuse firsthand, but the women told us stories.”

Victims told him about their lives and their families were threatened if they did not do as they were told. And they said they would be beaten if they didn’t provide their controllers with money.

In such an environment, where love, compassion and hope were lacking, Herr said she couldn’t help but think that if she could stop and smile, it might change something inside. victims – or maybe everything.

â€œThey all come so broken and they have no value in their own lives,â€ she said. â€œThey got used to hearing that they are worthless and that they are not loved. They just hurt over and over again. Many of them need a doctor’s appointment, so that’s covered as well.

After returning from his first trip, Herr said she didn’t think she would return to Cambodia because she felt she couldn’t tell the difference.

But she returned in 2019 with 8-year-old Lucas and started to think about how she could do more to help. This led to the formation of Baking for Freedom to raise funds for their future mission trips. Herr said she chose baking as a fundraising mechanism because she had always loved to cook and eat, and had been cooking since she was little.

During this visit, she and her son helped distribute food and help children from poor communities in Phnom Penh, the capital of Cambodia. They also worked at the Hope House of Extreme Love Ministries, which provides shelter for formerly trafficked children up to the age of 18. The couple took the residents to a soccer game, a water park, and ate pizza with them.

â€œThere is hope in all of this,â€ Herr said. â€œPeople are committed to changing mindsets, educating and bringing freedoms, physically, emotionally and spiritually. The work is in progress and there is hope and anyone can play a part in it, be it praying, offering or buying a cupcake.

After that trip, she found that COVID-19 restrictions were hampering future travel to Cambodia. Herr therefore reoriented his fundraising to support Extreme Love Ministries and their missions.

After raising over $ 20,000, Herr and her husband decided to make Baking for Freedom a nonprofit in April 2020. Herr said online bakery sales at bakeforfreedom.org are experiencing such a high level. success that it expands the non-profit organization to sell t-shirts, necklaces and gift certificates before the end of this year under a new name, Operation Love. Food labels will remain Baking for Freedom.

Herr will sell his baked goods and other items at a December 4 craft fair at the Mountain View Community Church at 1191 Meadowlark Way. Proceeds from sales of Baking for Freedom will fund mission trips to Cambodia.

Ramona resident Lindsay Santa said she supports Baking for Freedom by purchasing their baked goods and other products, and recommends the non-profit organization to its PR clients. Santa Claus said the work of the ministry is a real call for Herr.

â€œShe has a special place in her heart for these children in Cambodia,â€ said Santa Claus. â€œBrenda has the ability to show kindness and compassion to everyone she meets instantly. The community she serves embraced her and takes refuge knowing she has her unwavering support here in the United States.

Herr said she was drawn to change, as well as hope and love, for the Cambodian people.

â€œThe need is great,â€ she said. â€œI carry them in my heart and I feel called. This is the reason why I do what I do. I am already busy so I chose to add this ministry to my life because it is my passion that drives me.

Donations can be made to Baking for Freedom through the Venmo @ Brenda-Herr account, or by PayPal and credit card online at bakeforfreedom.org/donate/ or by sending a check to Herr at 15455 Wyeport Road, Ramona, CA 92065 cash donations or for more information email [email protected] or call 1-858-342-6943.