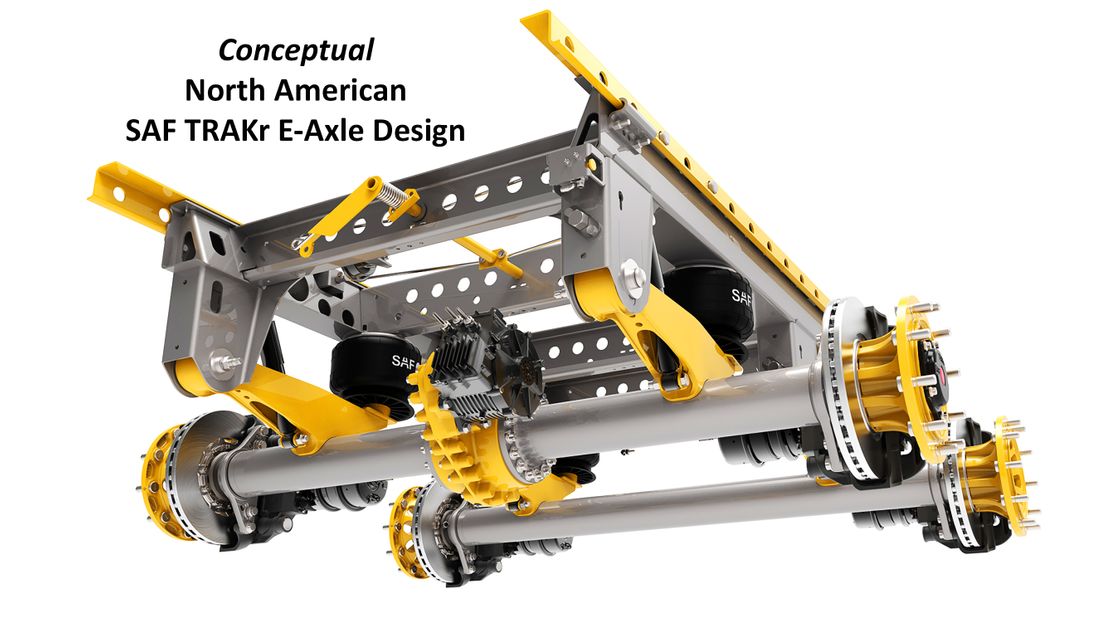 SAF-Holland is now in the market and product development phases of its electric trailer axles for North American applications, especially for fleets with all-electric refrigerated units. The company briefed reporters on the Trakr electric axle trucking during a March 6 press conference at the American Trucking Associations Technology and Maintenance Council’s annual meeting in Orlando, Florida.

“We see that society in general is moving towards cleaner and greener transport systems. And Trakr is a flexible solution for fleets that want to do that and want to be sure they’re in compliance if that trailer goes to a state with more stringent emissions, like California,” said Bill Hicks, director of product planning, SAF-Holland.

First shown in concept form at the 2018 IAA commercial vehicle show in Hannover, Germany, the company’s electric axles have since undergone further development, the company said. The SAF-Holland Trakr design uses a high-voltage generator module for electrical power regeneration to reduce emissions and fuel consumption of the entire vehicle. Additionally, the electric axles have undergone rigorous testing in real-world operations in Europe and South Africa.

“Initial feedback from drivers and fleet managers in Europe has been very positive, and there is increasing demand to fit more test vehicles with electric axles,” said Mike Ginocchio, Vice President, Engineering – Americas.

SAF-Holland considers the ideal application for the Trakr to be refrigerated fleets so that their trailer refrigeration units can be operated fully electric. The company said that “purely electric operation reduces noise and will help fleets meet proposed new zero emissions standards. Additionally, it allows the trailer’s TRU to operate when unhitched without using diesel fuel, which is very beneficial for night-time city center deliveries. Electric operation also extends the life of individual TRU components.

Other features of the Trakr include a modular construction strategy so that components are “configured for ideal integration, resulting in a modular system for maximum system efficiency”. The modular trailer electric axle system allows for easy installation by trailer OEMs and uses standard assembly line procedures.

Maintenance is described as simple and economical, as the electric generator drive unit does not need to be removed when servicing the wheel ends. Wheel end components, with the exception of proprietary hub assemblies, remain unchanged for ease of maintenance. Wear parts such as brake pads, calipers and brake discs are standard components from SAF-Holland to guarantee and simplify spare parts supply and maintenance.

SAF-Holland said the Trakr electric axle will be available in the future on SAF mechanical and air suspended tandem axle sliding systems for refrigerated trailer applications.